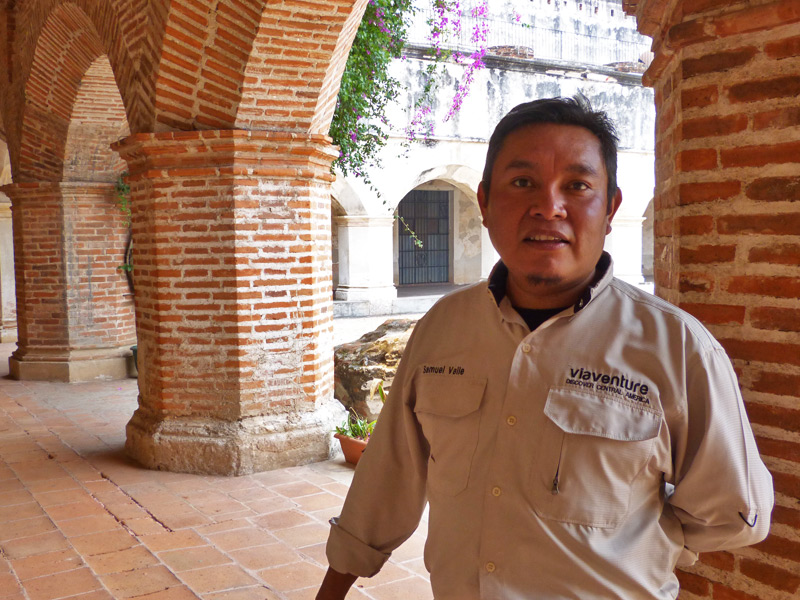 While studying in the United States Samuel Valle, Viaventure’s Guide learned something that wasn’t in his textbooks, but the revelation changed his career.

Born and raised just outside colonial Antigua Guatemala, Samuel had been working in the hotel industry when the opportunity arose for him to study at Florida Community College in Jacksonville.

“During those two years, I noticed that a lot of people didn’t know about Guatemala,” he recalled. “So when I came back I decided to change my career from hotel management to become a tour guide. I wanted to let people know about my wonderful country.”

He quickly became one of the top guides for Antigua-based Viaventure, which operates tours in Belize, Costa Rica, Guatemala, Honduras and Nicaragua.

Bursting with enthusiasm for his native country, Samuel, 44, leads travelers from around the world to well-known and off-the-radar destinations throughout Guatemala.

With Guatemalan culture and tradition in his DNA, Samuel possesses expertise that doesn’t come from a classroom.

If you’re looking for an obscure fruit in an indigenous market, Samuel will find it. Want to take a dip in the hidden, hot springs bubbling up in Rio Dulce? Samuel will take you there. Want to know the backstory of the colorful chicken buses that barrel through the countryside? Samuel knows all about it.

Want to take home a wooden mask of the cigar-smoking, rum-drinking Guatemalan deity Maximón? Well, Samuel can explain what happened when he was leading curious travelers to Maximón’s eerie shrine in Santiago Atitlán:

“I went to the shop and asked the owner. He said, ‘Yes, I have one mask.’ So my client and the vendor agreed to a price, and when I saw the faces of my guests, I knew that made the trip for them, they were so pleased and surprised. It was one of those things that I didn’t expect to find, but we did!”

With his abundant local knowledge and outgoing personality, Samuel delivers those “wow” moments as he proudly shows guests the wonders of his country.

“Small things make a big difference, like simply having lunch and roasting coffee with a local family, or finding something special like Maximón’s mask,” Samuel said. “That’s something clients will remember when talking about their journey in Central America.”