7 ways to immerse yourself in paradise

Dotted with volcanoes, blanketed by rainforests, and perched between glistening Pacific and Caribbean waters, Costa Rica overflows with nature at its finest. 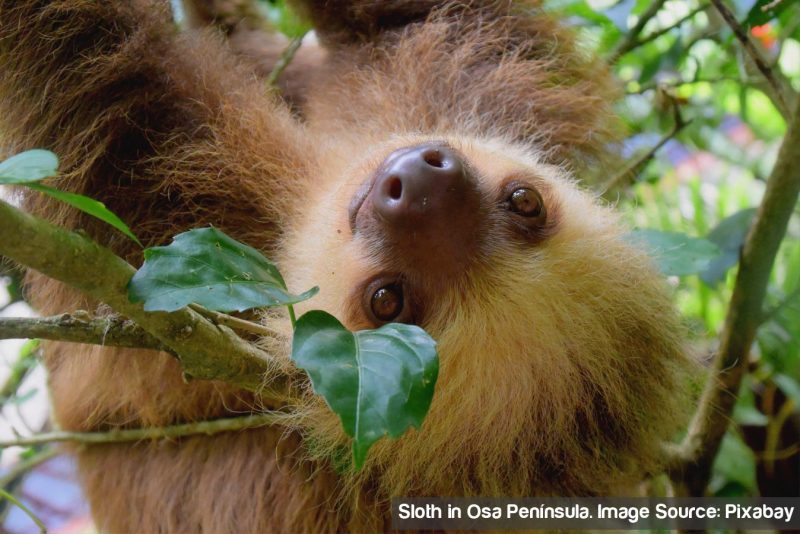 Step into an untamed paradise where nature reigns over lush rainforests, unspoiled beaches, and watery mangrove forests. Described by National Geographic as “the most biologically intense place on Earth,” the Osa Peninsula stands out as the eco-epicentre of a country already known for abundant natural wonders.

Take a rugged hike in the rainforest of Corcovado National Park, which occupies one-third of the peninsula, to see jaguars, ocelots, and the Baird’s tapir (Central America’s largest land mammal), amongst many others.

Look in the treetops for brilliantly plumed scarlet macaws, toucans, crested guans, and spider and howler monkeys. Don’t be surprised to see a delicate blue morpho butterfly dancing about. Just outside the sprawling reserve, go canyoning down a series of waterfalls for the thrill of a lifetime.

Refresh at newly renovated ranger stations at La Leona, San Pedrillo, and waterfront La Sirena, all linked by well-marked trails. You can even bunk overnight at the new dorm-style lodge at La Sirena, which also serves basic meals.

By boat or kayak, be sure to meander along the watery trails zigzagging through a 330-square-kilometre (127-square-mile) mangrove swamp in Drake Bay, on the northern end of the peninsula.

Watch long-legged herons and egrets snatch fish in their beaks whilst cormorants and anhingas perch on sunny branches to dry their wings. Scan the tangled mangrove roots for crocodiles, raccoons, and crabs. You may see a tree boa slithering through the branches.

Hop a boat for a fun and bouncy ride to Cano Island and enjoy amazing scuba and snorkeling. Dive into an open-sea aquarium thriving with eagle rays, sea turtles, and endless schools of fish cruising amongst the corals.

If you’re a surfer, paddle out to an inviting wave (beginner to expert levels) at Cabo Matapalo, a remote village on the outermost point of the peninsula. Birdwatchers will enjoy Matapalo, too.

Along the Golfo Dulce coast, relax and swim on any one of several secluded beaches. Or take an inland hike to see the birds and wildlife that flourish in the rainforest.

After sampling just a few of its wonders, you’ll see why National Geographic praised the Osa Peninsula’s natural virtues.

2. Get an adrenaline rush with a canyon canopy tour 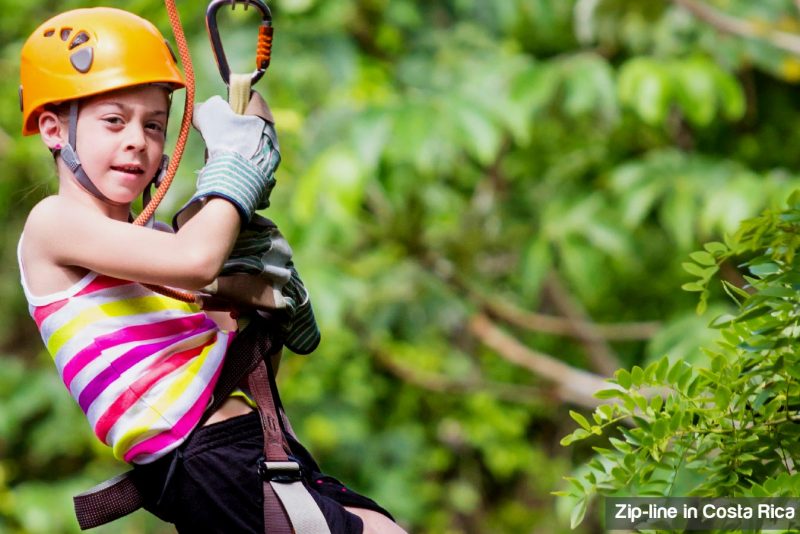 Fly high above jungle treetops and swing between narrow, canyon walls in a dynamic, adrenaline-pumping adventure along the scenic Río Blanco in northwestern Costa Rica.

Test your limits with high-flying zip-lining followed by rappelling, rock-climbing, and Tarzan-style, swinging challenges. Cross three hanging bridges, including a heart-stopping 27-metre (90-foot) span, all within the stunning canyon formed by the erosion of the Río Blanco over the millennia.

Your thrills take off in a verdant forest located at the foot of the Rincón de la Vieja Volcano, about 25 kilometres (16 miles) from Liberia. Start by streaking along a 244-metre (800-foot) zip line, the longest of up to seven you’ll ride. A couple more zip lines deliver you to a narrow, densely forested rock canyon high above the rushing river.

The adventure amps up as you cross three hanging bridges and push off canyon walls on two Tarzan swings and a controlled, 20-metre (65-foot) rappel to the canyon floor. Choose from two routes along a natural rock-climbing wall to come back up.

Hold tight as you negotiate three via ferrata (Italian for iron way) crossings, equipped with anchors and various hardware to ease you along. In all, you’ll perch on 20 platforms, some rock based and others suspended on canyon walls.

Whilst zip-lining can be enjoyed in many Central America travel destinations, this canyon canopy tour is a heart-pounding, high-energy adventure. 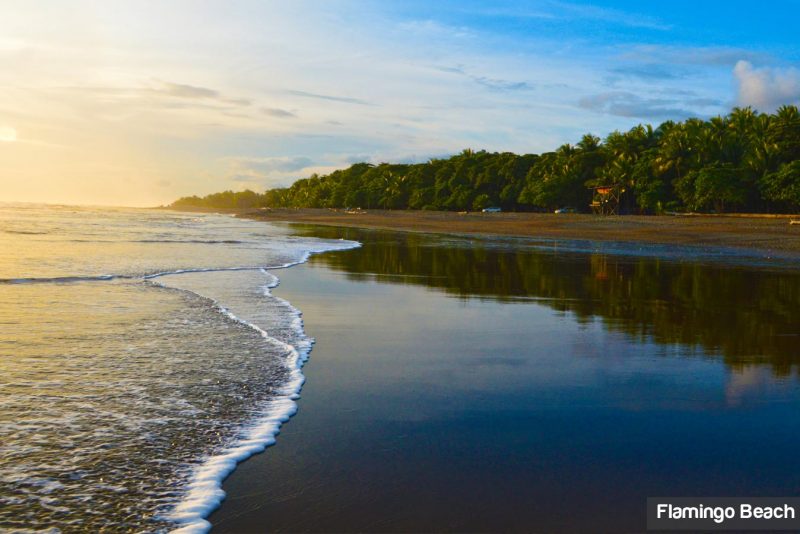 Hit the four most amazing beaches of Guanacaste province to experience Pacific surfing, snorkeling, sunning, and sea-turtle destinations all within easy reach.

From November through April, witness sea turtles coming ashore at Playa Grande to nest and lay their eggs. Roughly 450 hectares (1,110 acres) of coastline and mangrove swamp comprise the Marino Las Baulas National Park, one of the world’s most significant nesting sites for the endangered leatherback turtle. You can also see marine birds, including the white ibis and the blue-winged teal, amongst others.

Be sure to enjoy a leisurely beach stroll and the warm ocean breeze, before or after paddling out in a kayak to explore a mangrove estuary thriving with birds and marine life.

Grab a surfboard at Tamarindo, a wonderful stretch of unspoiled beaches offering perfect waves for surfing and incredible biodiversity. Although Tamarindo has evolved into the region’s most developed and accessible tourist town, you’ll find its laid-back vibe permeating daily life.

At beautiful Conchal Beach, tickle your feet on the crunchy white sand, formed by countless seashells that the tides have pulverized over the ages. (The beach takes its name from concha, the Spanish word for shell.)

Then slip on your mask, fins, and snorkel and swim just offshore to watch a parade of marine species in the crystal waters. Moray eels, bright butterflyfish, and friendly blowfish live and feed amongst the coastal rocks. 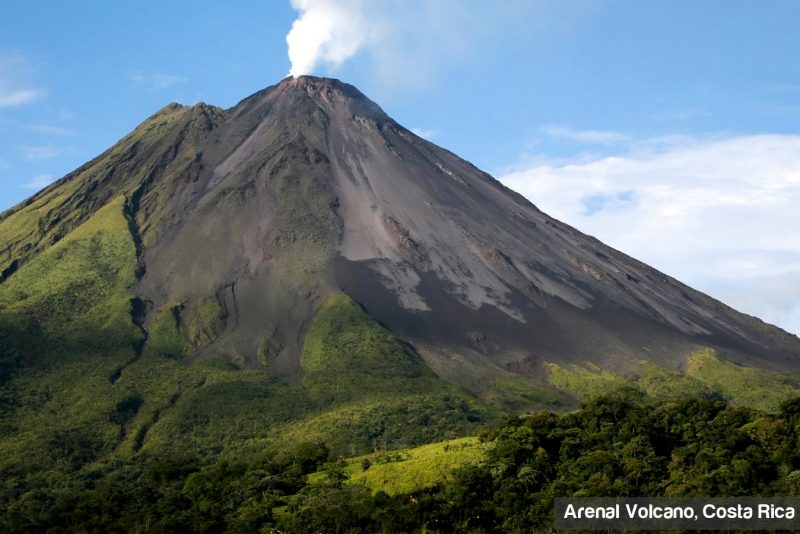 Walk across fields of cooled lava to savour the view of Costa Rica’s most iconic volcano, Arenal, which towers 1,657 metres (5,436 feet) above sea level.

Take in the majestic sight at the El Mirador lookout, but go in the morning, as late-morning and afternoon clouds usually obscure the dormant volcano’s lofty summit.

Whilst Arenal forms the centrepiece of the 12,080-hectare (29,850-acre) Arenal Volcano National Park, much more adventure beckons in the lush, surrounding landscape. Sky-blue waterfalls and fascinating caves dot the landscape amid the dense tropical greenery. Choose from hiking, biking, horseback riding, zip-lining, or even whitewater rafting to sample the park’s natural splendors.

Nearly all 850 species of birds identified in Costa Rica can be found in the jungles surrounding Arenal, so a colourful, clattering display awaits you. Not only will you see macaws, parrots, toucans, and possibly the elusive quetzal, watch for monkeys, jaguar, deer, and snakes as you explore.

To get a delightful toucan’s-eye view of the wildlife and rainforest canopy, walk 3.4 kilometres (5.5 miles) along jungle trails and 15 hanging bridges in the Arenal Hanging Bridges Park.

Go kayaking, canoeing, or fishing at scenic Lake Arenal, covering nearly 85 square kilometres (33 square miles) at the volcano’s base. The steady wind whipping across its surface makes the lake a top destination for windsurfers, sailboarders, and stand-up paddle surfers.

Or settle into a boat for a tranquil lake cruise. Look for water birds such as kingfishers, flycatchers, anhinga, and the stately great blue heron. And just look east to see the idyllic volcano dominating the horizon.

After wrapping up your exploring, luxuriate in the thermal pools at nearby Tabacón Hot Springs. Flowing naturally from the foot of Arenal, the pure, mineral-rich waters feed dozens of cascading waterfalls and warm pools.

Select your comfort zone, as temperatures of the magma-heated water range from approximately 25-50 degrees C (77-122F). Float in a rejuvenating oasis whilst the sounds of singing birds and cascading falls serenade you.

5. Ride the rapids of the Río Balsa 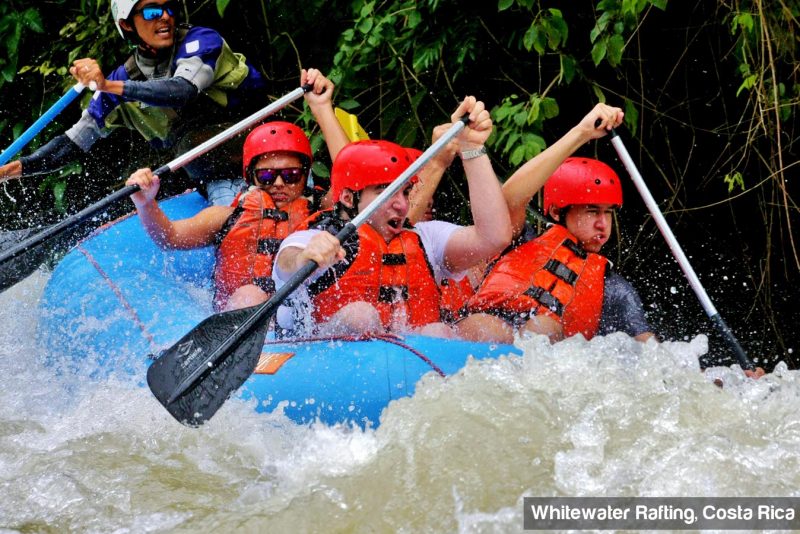 Combine whitewater adventure with wildlife viewing as you paddle down fun, churning rapids on the scenic Río Balsa, a spectacular river near base of the Arenal Volcano.

Challenge yourself as you slice through 10 kilometres (6.4 miles) of continuous rapids with names like Congo Loco and Rock around the Croc, and the more challenging Las Dragas stretch. Navigate roughly 30 rapids in this escapade down a scenic, rainforest-shrouded river (Class 2-3).

Perfect for nature lovers, outdoor enthusiasts, families, and rafting novices, the adventure starts with paddling and safety instructions from your guide. Next, strap on your helmet and lifejacket, pick up your paddle, and ease into the raft for your thrilling whitewater ride.

Along calmer stretches, get an eyeful of birds, butterflies, and animals that make their home in the vines and lush forest surrounding the river. You’ll spot monkeys, sloths, iguanas, and tropical birds, such as ospreys, toucans, oropendolas, and more.

Since the river features a wonderful combination of fast-tumbling waters and gently flowing, docile waters, take a refreshing dip along the way in one of the natural pools. Hop into another tranquil pool afterward as your pulse rate returns to normal. 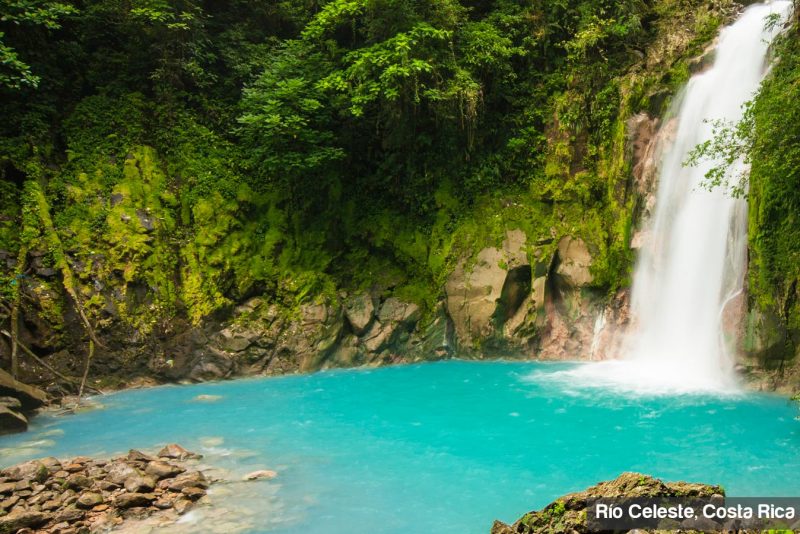 Enjoy a soothing, natural soundtrack of birdsong and gently flowing waters as you follow well-groomed paths leading to three scenic waterfalls bursting out of mountain greenery.

Pick up a walking stick as you set out with your guide on the picturesque, tree-shrouded trail alongside a pristine creek. Have your camera ready to snap photos of diminutive hummingbirds, black guans, the seasonal quetzal (April-May), and other forest wildlife.

Soon a wooden sign interrupts your trek to say you’ve reached the first of three waterfalls, La Melodia (The Melody). Ease out on a small suspension bridge to watch the water rushing over a rocky cliff and crashing onto the boulders below.

After savouring the visual feast, walk another 10 minutes or so to the El Silencio (The Silence) waterfalls, perhaps named for the awestruck effect it casts over visitors. Standing on the wooden overlook, feel the cool mist floating up as you witness the stunning turbulence churning below.

From El Silencio, follow the trail to a winding set of steps to La Promesa (The Promise), the most dramatic of the trio. Bisecting bright forest greenery, the rush of water forms a bluish-white streak as it flows down a roughly 30-metre (100-foot) rock face. A broad, sun-splashed clearing below reveals a pristine, natural pool fed by the gently flowing cascade. Dip your fingers or toes into the pool, as you may find the water a little too chilly for a swim.

Though you can choose from hundreds of spectacular falls in your Central America travels, this outing pleasantly combines three delightful cascades into one ethereal outing just 90 minutes from the San José airport. 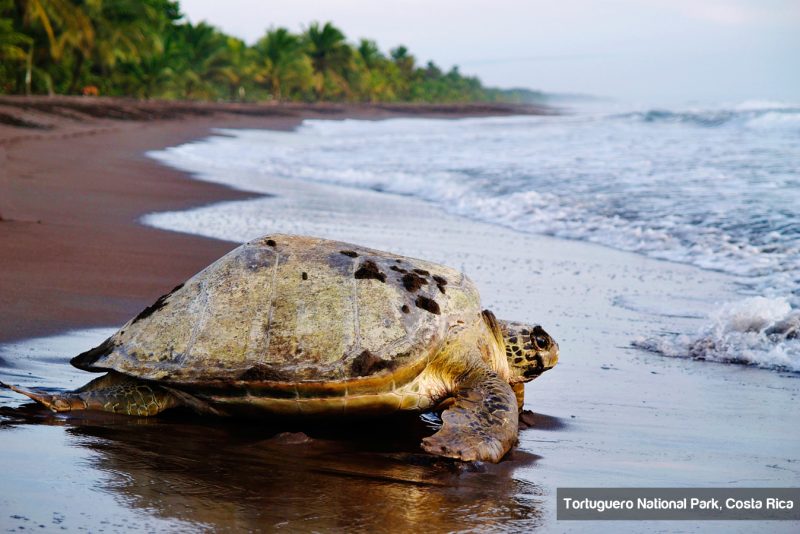 Witness an amazing phenomenon of nature as sea turtles clamber out of the surf and up the beach to lay their eggs at the remote Tortuguero National Park. But don’t limit yourself to the sea-to-shore nesting parade — hundreds of additional wildlife species, including 300 varieties of birds, thrive in the park.

Take a boat or plane with your guide to the park, which covers approximately 770 square kilometres (300 square miles) with rainforests, mangrove swamps, beaches, and lagoons. Next, explore the park by boat, cruising through various canals, to admire its pristine serenity and active wildlife.

Be on the lookout for caimans and crocodiles cruising the waterways. Maybe you’ll see a shy, gentle manatee surface for air after grazing on river vegetation. Watch along the shoreline too, to spot poisonous frogs and Basilisk lizards that walk on the water. And enjoy the waterfowl — kingfishers, toucans, blue herons, egrets, cormorants, and more.

Hike into the forests to see jaguars, three-toed sloths, and several species of monkeys, whilst parrots, toucans, and other avian species dart through the canopy.

To best enjoy the park’s namesake visitors, take a night tour when sea turtles — green, leatherback, hawksbill, or loggerhead — come ashore. The reptiles ease out of the water at various times of year to nest and lay their eggs ashore when the moon fades. For a unique perspective, go out on a boat, canoe, or kayak and watch from just offshore.

And since you’ve come this far in your Central America travels, take a boat to visit tranquil Tortuguero Village, a small community with strong Afro-Caribbean roots. Stroll around the village school, maybe buy a gift at the market or souvenir shop, and visit the Caribbean Conservation Corporation to learn about the turtles.

Hotels that fits your passion for fishing, coffee or rainforest