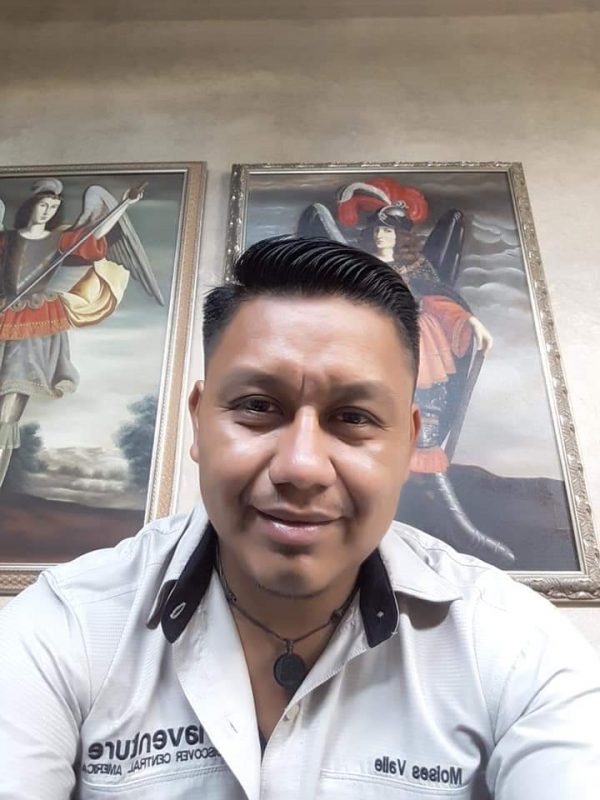 Born in Antigua Guatemala, exactly 100 metres from the town’s idyllic Central Park, Moises Alejandro Valle García calls himself a true panza verde (green belly), the nickname for native Antigüeños given the abundance of avocadoes that grow nearby.

“Antigua Guatemala was and is my home. I grew up and studied here, I got married here, and I live here with my wife and our four children. With its beautiful churches, monasteries and convents, known for its beauty, history and culture, I feel very proud to be able to call Antigua Guatemala my home.”

Raised by his grandparents, Moises grew up in a charming colonial home, part of which served as a Spanish-language school and guesthouse for the students. “I think that one of the reasons why I work in tourism is because since I was a child I have been with tourists, seeing them, speaking to them, living with them, which helped me a lot with languages. I started to speak with tourists in French, English and Spanish. When my family did activities with tourists, I always went with them. I did not imagine that this would help me in my future work, but it did.”

From Jade Salesman to Tour Guide

Through high school and college, Moises wanted to be a computer engineer. Working by day as a salesman in one of Antigua’s many jade shops, he studied at night and earned a college a degree in computer science. Guides who brought tourists to the jade shop were impressed that Moises spoke fluent French and English. “They were the ones who told me that I should work as a tour guide because I had the charisma, knowledge and especially the desire to teach tourists about the beauty of Guatemala.”

In his off-hours, Moises would conduct occasional tours, inspiring him to launch a career in tourism and hospitality in 2003. After working as a night manager at the historic Casa Santo Domingo Hotel, Moises started to work solely as a guide, later earning his credentials over two years of study at the Guatemalan Tourism Institute (INGUAT) Moises, 38, joined Viaventure in 2016.

“What I enjoy most about guiding is the contact with people, learning new things every day, and making new friends. I also enjoy showing off my beautiful and mega-diverse country. For example, you travel for a few hours and you can be in such different places, with unique gastronomy, language, and traditional clothing.

“Being from Guatemala and knowing about interesting places and experiences for my guests, I can stop with the car and show them something that they were not expecting — unique moments that make unforgettable memories. Seeing the smiles on their faces is what makes everything worthwhile. I love being a guide, because it’s more than a job, it is a lifestyle. I do it with passion and treat my guests as if they were my own family.”

Moises’ favourite interests, after his family, of course, are architecture, history, sports, and travel. He’s travelled extensively in Central America, Mexico, France, Spain, Belgium, and Germany. “Something I say is that once you start travelling, it is addictive!”  For family outings in Guatemala, Moises is partial to a quiet cabin high in the mountains, although his children prefer the beach. “I like the cold more than the heat,” he confesses. His hobbies include technology, reading, and growing orchids.

Part of the Viaventure Family

Moises’ contagious enthusiasm for his country and his tourism expertise have distinguished him in Guatemala’s travel industry. In 2017, Moises was selected as one of Viaventure’s best guides, earning him a trip to Nicaragua with other outstanding staffers. In 2019, the Carrefour supermarket chain named Moises as one of the top guides in Guatemala.

At Viaventure Central America, Moises appreciates the emphasis on constant improvement and continuing education in varied aspects of tourism. “I love that at Viaventure we have an annual training in which we learn new things and share our own experiences from the field. We become better guides, better people, and closer friends.”

He’s also grateful for the company’s commitment to its staff, including health insurance for employees, exercise equipment at the office, and a variety of weekly workouts with different types of fitness coaches.

“We all feel like part of the Viaventure family. It’s the best agency I have worked for because they care about their staff, they have invested in us, they are concerned about our well-being, and they want the best for us all.”

Meet some of our other guides:

Viaventure Guides – Our Most Valuable Resource

3 Accommodations for Families in Central America