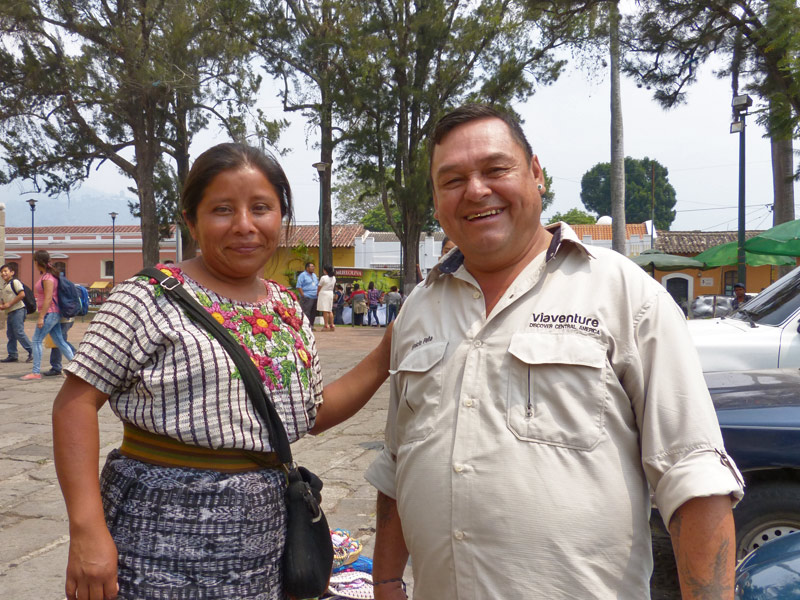 Knowing how to exceed guest expectations while proudly leading tours throughout Guatemala, veteran guide Vinicio Peña serves as an unofficial ambassador for his native country.

Born in Antigua Guatemala, Vinicio grew up in Canada’s Yukon Territory before returning to Guatemala at age 15. For the next decade, he traveled extensively in the country, getting to know some of its remotest regions.

Combining his national pride with his in-depth knowledge of Guatemala’s geography and people, Vinicio was a natural for working in tourism. As a Viaventure guide for nearly 15 years, he has crisscrossed the country on archaeology, birding, trekking, and numerous other tours.

“My favourite part of the job is sharing with people the best things about my country,” he said.

Among Guatemala’s many fascinating destinations, Vinicio’s personal preference is the jungle. And topping his list of experiences was an early morning journey through untamed rainforest to the majestic ruins of Tikal. As Vinicio drove down a jungle road chatting with his guests, one of them shouted, “look, look!”

“It really surprised me, it was a ‘wow’ moment — we had a big, beautiful jaguar ahead of us,” Vinicio recalled. “I stopped the car and wanted to reach for my camera, but I knew if I turned to look for it, I would miss the moment, so that picture is right here — in my head — and it’s the best picture I’ve ever taken!”

Spontaneous moments like this are why Vinicio greets each day with enthusiasm. “I get to wake up every morning knowing that I’ll be going somewhere different, meeting different people, and knowing it will be a great day doing something that I love.”

Proud of the range of culture and ethnicity in Guatemala, Vinicio also enjoys showing guests day-to-day life, as found in coffee cooperatives, indigenous workshops and markets, and restaurants specializing in traditional cuisine.

His guests can’t help but notice Vinicio’s passion for his country.

“One client was talking to me about Guatemala and asked me what it’s like to be a tour guide. I told her for me, it’s like being an informer, a voice for my country. And she said, ‘You are a real ambassador for your country!’ It was the one of the best compliments I’ve ever received.”