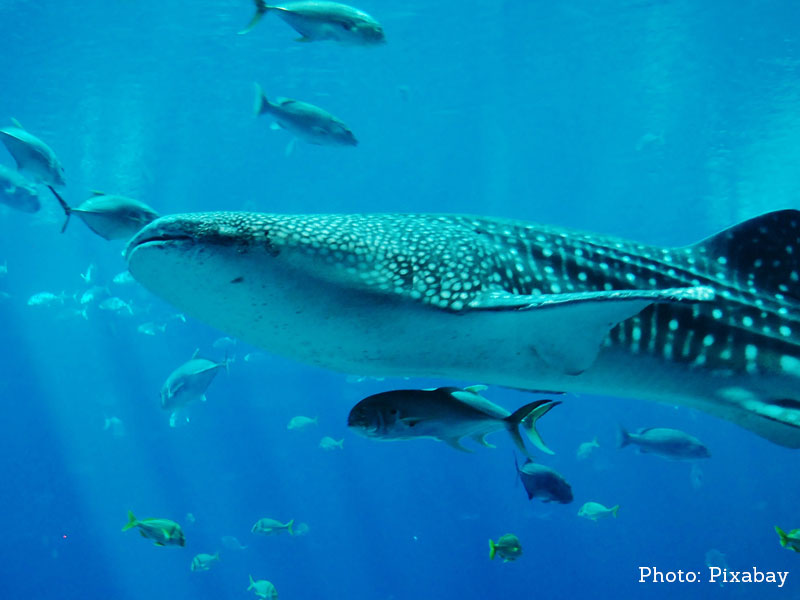 For a chance to swim with the biggest fish in the world, head to the turquoise waters of Belize or Honduras for the migration of the massive but docile whale shark, measuring over 12 metres (40 feet) long.

Every year from March through June, whale sharks congregate along portions of the Mesoamerican Barrier Reef, the largest coral reef system in the Western Hemisphere.

The whale shark’s enormity — the fish can weighs up to 13.5 tonnes (15 tons) — amazes anyone not yet familiar with this gentle giant. Because of their placid and curious nature, swimming with whale sharks, whether with scuba or snorkeling gear, is a unique, even inspiring, experience.

They can be as close as a few feet away or even at touching distance, though divers and snorkelers are required to maintain a 3-metre (10-foot distance) to give them the space and respect they deserve.

See Them in Belize & Honduras

Despite their menacing looks and powerful presence, these predators don’t endanger humans in their midst. With mouths fully a metre (3.25 feet) wide, the whale sharks glide through the warm Caribbean Sea, gulping in water and using their specialized teeth to filter out food, including plankton, fish eggs, crustaceans, and small schooling fish.

Clouds of snapper spawn, a favourite meal, especially attract whale sharks to a site called the Gladden Spit, about 25 miles off the shores of Placencia in southern Belize.

Whale sharks also congregate amongst the Bay Islands of Honduras (Roatán, Guanaja, and Utila) at the southern end of the Mesoamerican Barrier Reef. The waters surrounding Utila, the smallest of the three isles, provide the best chance in Honduras to see whale sharks, some of which actually stay there year-round.

Their activity peaks around the full moons of April, May, and June, from about two days prior to 10 days after. Whale sharks also visit from October through December but tend to remain less active and solitary in the autumn months.

With a relatively small head and huge gill slits on each side, the whale shark is a dark grey or brown colour, and its back has an interesting white, yellow, and grey checkerboard pattern. Scientists believe whale sharks have a lifespan of 60-100 years.

Like many other shark species, the whale shark swims under the escort of dozens of remora fish. Measuring 1-3 metres long (3.25-10 feet), the remora feed on scraps of food dropped by their host. Often attaching themselves to the migrating creatures, remora also eat otherwise-irritating parasites on the shark’s skin.

The whale shark’s seasonal presence adds one more species to the very long list of incredible marine life that thrives in the Mesoamerican Barrier Reef, one of the most diverse ecosystems of the world. At 900 kilometres (560 miles) long, it is the second-largest coral reef in the world and supports 70 hard coral species, 36 soft coral species, 500 species of fish, and hundreds of invertebrate species.

Be aware that whale-shark sightings cannot be guaranteed, as the fish remain on the move, and dive boats are allotted specified time slots to protect the whale sharks from excessive interference. Even if you don’t get to see these magnificent creatures, you will see legions of colourful tropical fish and incredible coral formations as occasional sea turtles and manta rays cruise by.

So grab your mask and fins for a chance to see the biggest fish in the sea while visiting what Charles Darwin described as “the most remarkable barrier reef in the West Indies.“

Hotels in Central America for Your Perfect Family Trip

This is Uaxactún: Scenes from the Guatemalan Jungle