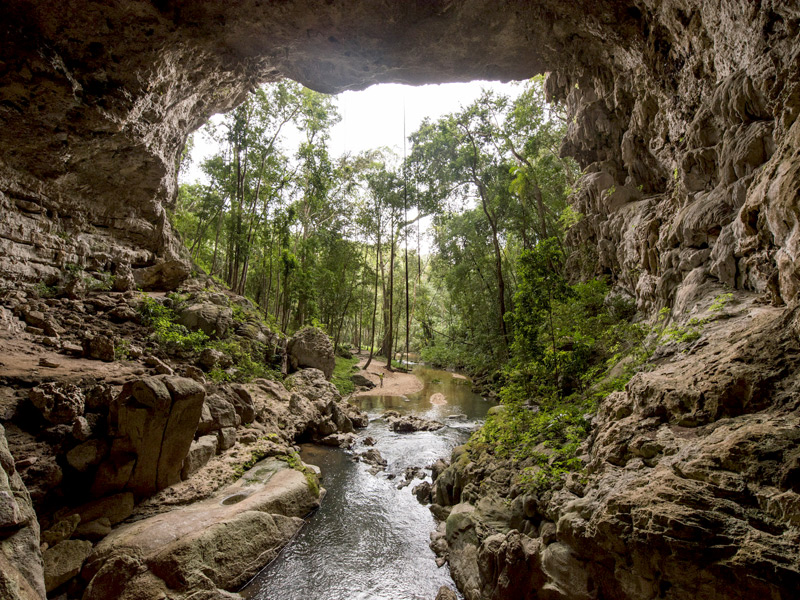 Mesmerizing experiences lurk in mysterious, serpentine caves hidden beneath the landscape of mainland Belize. Decorated with nature’s artistry, the formations served as ceremonial centres for the ancient Maya, who revered caves as Xibalbá — gateways to the underworld. Venture in on foot, by canoe, inner tube, or even by swimming. Here are five of Belize’s most intriguing cave systems:

Actun Tunichil Muknal, for a unique adventure into the Maya past

One of the most impressive ceremonial caves of the ancient Maya, Actun Tunichil Muknal (ATM or “Cave of the Stone Sepulcher”) consists of a series of chambers linked by five kilometres (three miles) of twisting passageways. Using only the light from your headlamp, walk, swim, and climb through dark and sometimes tight passages adorned with stalactites, stalagmites, and artefacts. Clamber up a rock to enter “The Cathedral,” the final, upper chamber where the Maya performed human sacrifices and other rituals. Full or partial skeletons remain on view in the spacious chamber, which features a soaring altar carved from the native stone. Reaching the site entails a 45-minute hike through dense jungle and wading across a stream in the Tapir Mountain Nature Reserve in the Cayo District of western Belize. A spring-fed pool guards the cave’s entrance, so swim in and then wade up a subterranean river to explore this fascinating Maya underworld — a journey not for the faint of heart.

Barton Creek Cave, for a leisurely canoe tour into the underworld

Use a paddle and headlamps for a leisurely canoe tour of the Barton Creek Cave, also located in the Cayo District. Ferns, vines, and verdant jungle growth drape the cave’s jagged, triangular mouth, which leads into the watery formation. Stalactites hang high overhead as you float past impressive calcite crystal formations in cathedral-like chambers. Other passages have such low clearance you’ll need to watch your head as you ease by. The sound of your paddle pushing through the calm river echoes off the cave walls, adding an eerie element to the captivating experience. Like many in Central America, the cave served as a Maya ceremonial centre. In addition to numerous artefacts, such as pottery and jewelry, archaeologists discovered the skeletal remains of more than 20 people in the cave.

Tucked away in the foothills of the Maya Mountains in the Punta Gorda District of southern Belize, the intriguing Blue Creek Cave fascinates visitors with its swirling crystal-clear water, mineral pools, and Maya lore. The cave’s gaping mouth pours out a steady flow of pristine water from deep inside the 8-km (5-mi) cave system. Rushing water during the rainy season produces small waterfalls, pools, and rapids, making for a thrilling swim and incredible scenery at the entrance. At times, the torrent can be too forceful for venturing inside. During the dry season, the flow subsides, creating ideal conditions to hike or swim through the cave. Stalagmites and stalactites adorn the system’s roomy, open caverns and small narrow chambers. The Maya named this deep, winding formation Hokeb Ha (“Where the Water Enters the Earth”), and archaeologists believe it served as a ceremonial center. Reaching the cave takes a roughly 20-minute hike from Blue Creek Village through lush jungle and upstream along the banks of the blue-green river.

Caves Branch River, where you float downstream on an inner tube

Lie back in an inner tube and float leisurely through a cluster of caves in the pristine Caves Branch River in the Cayo District. Start with a short hike through the tropical rainforest at Jaguar Paw and ease into your tube at the river’s edge. Settle in and relax as you feel the cool rush of the currents, which deliver you to the foreboding cave entrance. Decorated with stalactites, stalagmites, and crystal-like, natural sculptures, the caves also contain Maya ceremonial pottery, wall carvings, glyph writings, and even skeletal remains of sacrificial victims. Meandering in and out of several caves, the river takes you through limestone archways opening into dark, soaring chambers and back out again into bright rainforest greenery. The trip offers a fun, tranquil way to enjoy nature’s artistry while providing a fantastic introduction to the Maya sacred underworld.

Che Chem Ha Cave, a dry system with a trove of Maya pottery

Che Chem Ha (“Cave of the Poisonwood Waters”) contains a wealth of intact pottery and evidence of its use as an ancient Maya burial site. Adorned with a Maya motif and protected by a metal gate to keep out looters, the cave’s yawning entrance looks like an image from an Indiana Jones movie. As you start walking through the narrow passages of this dry formation, notice the pottery shards on the floor and small, complete pieces elsewhere. Deeper into the system, ladders lead you to higher chambers containing an amazing number of large Maya pottery, some with lids and others still containing decomposed maize (corn) and other seeds inside. Reaching the cave, located in the Cayo District, requires a 30- to 45-minute hike. Although it contains some stalagmites and stalactites, Che Chem Ha is best known for its trove of artefacts rather than its geological features.