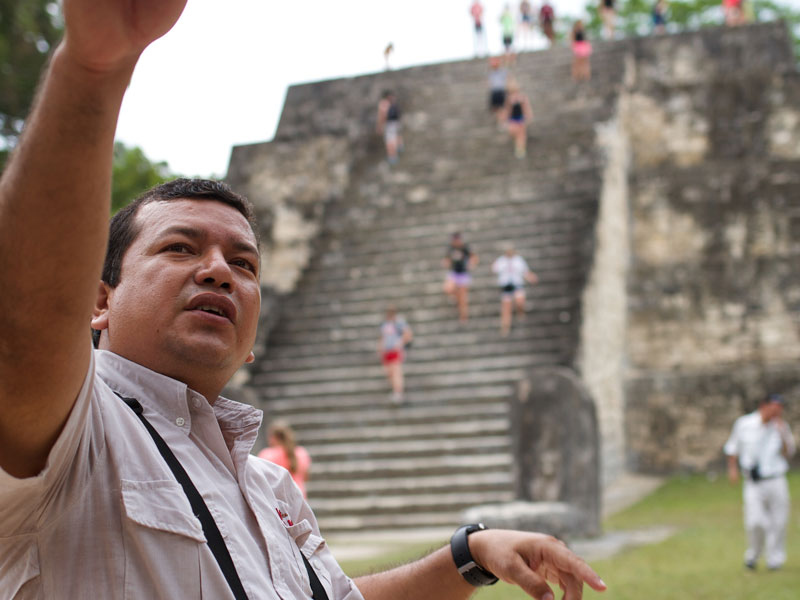 For nearly two decades, Carlos Vivar has helped clients explore the history, culture, and beauty of Guatemala, Honduras, Belize, El Salvador, and Mexico. A full-time member of the Viaventure team who assists with operations and trainings and guides many of our trips, Carlos grew up in Guatemala’s remote, northern department of El Petén, in a small community where airplanes were seen long before cars.

Called Uaxactún and comprising an archaeological site, too, Carlos’s village was a giant jungle playground where he grew up climbing ancient temples and listening to the tales his grandfather, a Maya shaman (spiritual leader), shared about his ancestors. “It was the best time of my life and was where I learned to respect and love nature,” says Carlos.

Sadly, it was also where he felt the impact of Guatemala’s civil war. Remote areas of the country with indigenous populations, like El Petén, suffered greatly during the conflict, and Carlos’s father disappeared. To help support his mother and seven siblings, he took a job as a chiclero (a harvester of natural gum) at just 8 years old. “I journeyed into the jungle for work. It was hard, but it was also how I began to develop a better understanding of the region’s flora and fauna.”

He worked as a chiclero for six years, but his family remained poor, and so Carlos decided to leave his village in search of a more formal education. He set out by himself—it was the first time he had ever left the Uaxactún area—and headed toward Flores, the main hub for visitors to El Petén today. In a small town called San Benito, he found a school, sat outside a window, and eavesdropped on a class. A teacher noticed him and invited Carlos to join him and his family for lunch; they later invited him to stay and attend school. “They were my guardian angels.”

Carlos lived with the teacher’s family into his early 20s but returned to Uaxactún almost every weekend. It was a 23-kilometer (14-mile) trek from the last bus stop to his village, and he often arrived long after dark. “It was a far walk, but I couldn’t resist stopping to watch the wildlife around me: toucans, snakes, lizards, monkeys—sometimes even pumas and jaguars.”

After finishing high school, Carlos studied tourism and then took a job with a tour operator. He worked for eight years before his company demanded all its guides speak English. Carlos went on hiatus and started offering free Tikal tours to English-speaking visitors in exchange for a few new words and phrases. After just three months, he learned enough, and his company assigned him his first English-speaking guests. “It went horribly,” he says. “Someone asked me if there were guerillas in the area, and I answered, ‘No, sir, only spider and howler monkeys.’”

Clearly, that was long ago, as Carlos’s English is now excellent, though you may detect a Southern drawl due to his penchant for country music. Over the years, he’s been recognized by clients and tour companies alike for his exceptional guiding skills and warm personality. He has led trips for renowned archaeologists and researchers from National Geographic, Cornell University, and the University of Pennsylvania and has won myriad guiding awards, too, most recently from the UK-based travel magazine Wanderlust, whose 2013 World Guide Award judges voted him “highly commended.”

Despite his many successes, Carlos has maintained close ties to Uaxactún. Indeed, he now leads tours there for Viaventure, granting others the opportunity to experience the wild jungles and ancient temples of his beloved village, too.

For a sneak peek at Uaxactún and an interview with Carlos Vivar, check out the video below.

A Taste of Honduran Farm Life