Notes on Guatemala: Where to Go, Eat, Shop & Stay

Guatemala is a fascinating country with many different faces, the majority of which are only revealed if you’re open to new adventures. This isn’t to say that you have to go far off the beaten path to find truly special spots—though sometimes that does help. Here, we’ve compiled a colorful mix of ideas on where to go, eat, shop, and stay that will show you more of the country’s authentic side. Go out, explore, and prepare to be wowed. 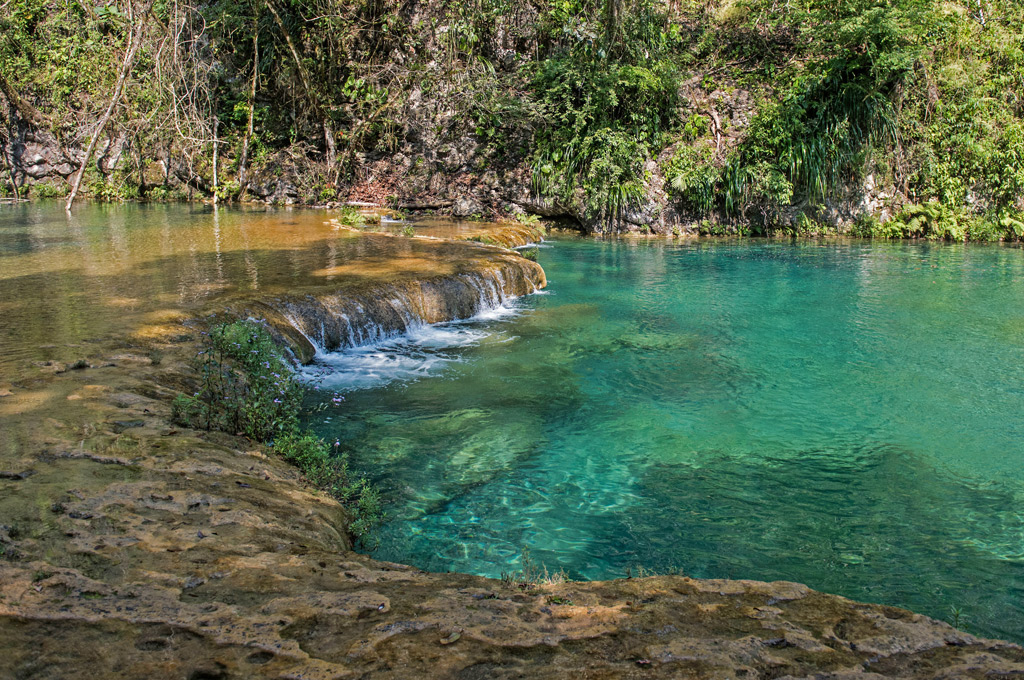 Situated in the heart of Guatemala, the mountainous departments of Alta and Baja Verapaz (together referred to as the Verapaces) comprise vast swaths of cool, rugged wilderness. Oft-overlooked by travelers, they’re an ideal spot for adventure-seekers, particularly those on the hunt for caves, coffee, cardamom, or quetzals—Guatemala’s national bird.

A pleasant city with modest amenities located near myriad outdoor wonders, Cobán is the region’s most convenient base for exploration. Once a stronghold of the Rabinal Mayas, it was founded in 1538 by Spaniards who dubbed it Ciudad Imperial—a name still in use today. In the early 1900s, German immigrants moved to the Cobán region to cultivate vast coffee and cardamom plantations called fincas. Although most German finca owners exited Guatemala around World War II, their crops continued to flourish, and today, the area is known for its excellent coffee and has helped make Guatemala one of the world’s largest exporters of cardamom.

Located deep in the forests of the Verapaces, Semuc Champey is considered by many to be Guatemala’s most exquisite natural feature; it comprises a series of swimmable, turquoise pools located atop of a 300-meter-long (984-foot) natural limestone bridge and is about as fantastic as it sounds. Not far away, you’ll also find Lanquín, a picturesque village that’s best known for its extensive cave system. Several kilometers long and only partially explored, this vast underground world is home to oddly shaped stalactites and stalagmites (some vaguely resembling animals), in addition to bats. Position yourself near the cave entrance at dusk to witness the mass exodus of thousands of these nocturnal creatures on the hunt for dinner.

The Verapaces are also home to the Biotopo del Quetzal (where a lucky few may spot the elusive bird), the airy, cathedral-like caves of Candelaria (some of Central America’s longest caves), and Laguna Lachuá National Park, a huge wetland preserve with an incredible blue-green lagoon. 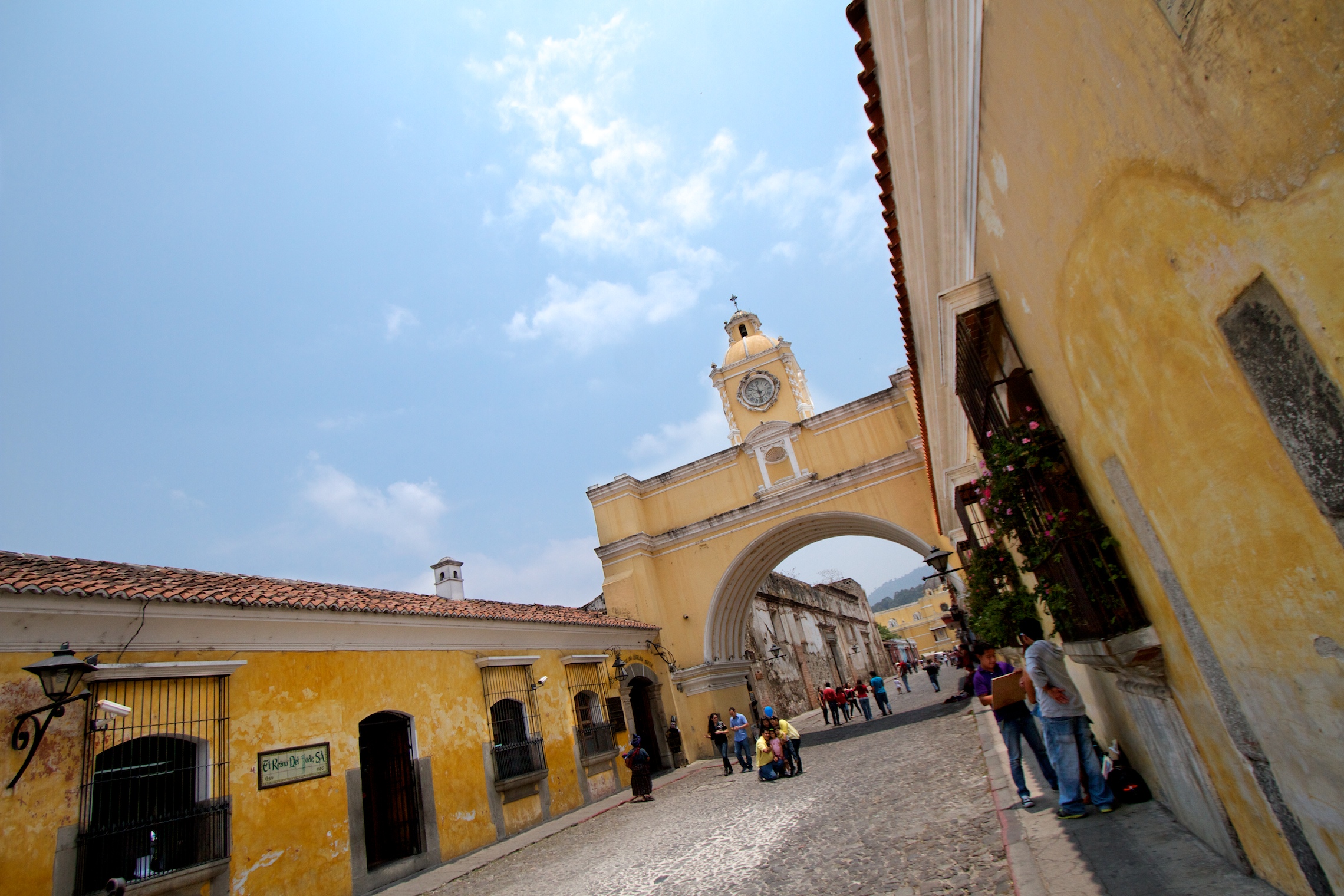 If you’re looking for authentic Guatemalan fare, La Casa de La Fonda Real in Antigua Guatemala is the place to eat—and not just for tourists. On any given day, more than half of the restaurant’s clientele comprises local Guatemalans. Here, your taste buds can travel the country as you try typical dishes from a variety of Guatemalan regions such as Tecpán, Cobán, and San Marcos. Try pepián de pollo (chicken served in a sauce of roasted tomatoes, chiles, spices, and pumpkin and sesame seeds), chiles rellenos (stuffed peppers), revolcado de marrano (pork stew with a tomato-chile sauce), suban-iq (chicken, pork, and beef cooked slowly in banana leaves), tamales made with chicken and pork, carne adobada (beef in a tangy adobo sauce), or kac-iq (turkey stew with roasted tomatoes, mint, and cilantro).

“My favorite dish is el comal de los recados,” says Ana Beteta, the operations manager at Fonda Real. “It’s a sample of pepián, kac-iq, and revolcado accompanied by rice and a tamale.”

La Fonda Real has been serving classic Guatemalan food with a side of (as it puts it) “antigüeña hospitality” since 1975 and currently has three locations in Antigua, all of which are located just minutes of each other. It’s the original location that’s the easiest to find, though: Just follow your nose. “It’s on Arch Street and has a grill set up right at its entrance,” says Ana. “The delicious smells that waft onto the street always draw people in.” 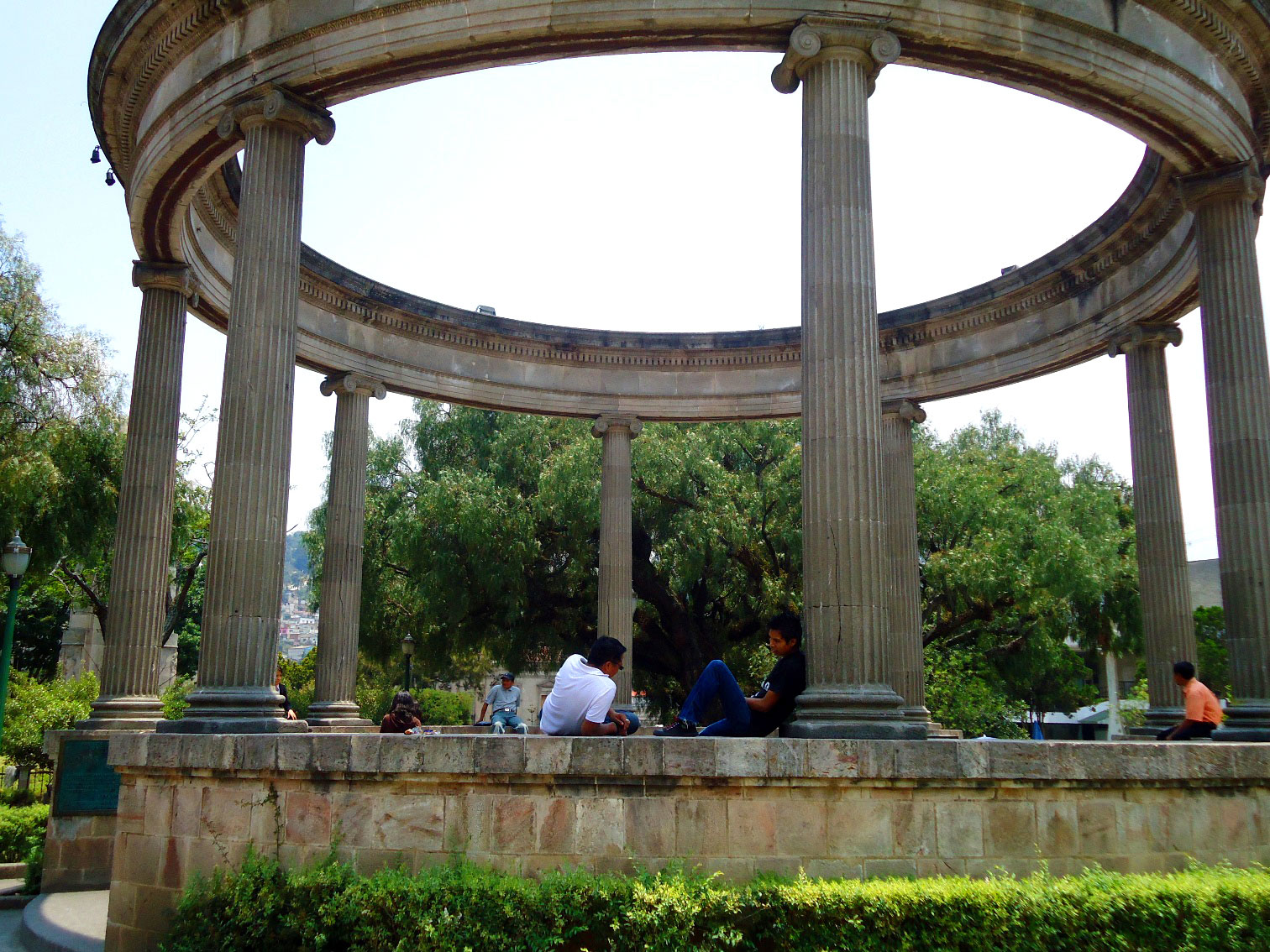 A tour of the city will give you a good look at Xela’s storied past, though day trips outside of the urban zone are a must, too. Xela sits in a rugged, sprawling agricultural valley and is surrounded by fascinating K’iche’ Maya villages. There’s San Francisco El Alto, which has a bustling Friday market with pigs, cows, sheep, and other livestock for sale; Almolonga, an agricultural hub renowned for its gorgeous—and prodigious—vegetables; and San Andrés Xecul, whose ornate Technicolor church has graced the front covers of guidebooks. You’ll find volcanoes to hike (one such is Santa María, whose near-perfect cone juts up over the city skyline), and hot springs to visit at Fuentes Georginas. No matter your plan, keep in mind that Xela is located at an altitude of 2,350 meters (7,710 feet) and gets cold at night, particularly in December and January. Bring a sweater. 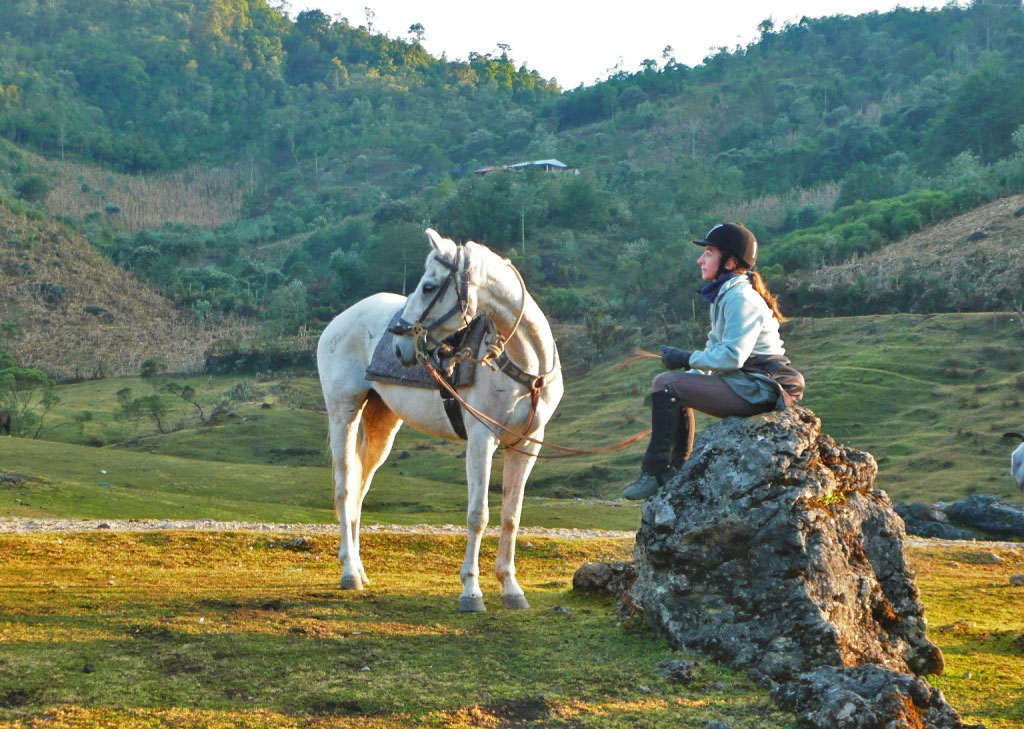 Located in the far reaches of northwestern Guatemala, approximately 25 kilometers (15 miles) northeast of the town of Huehuetenango and at an altitude of 3,000 meters (9,840 feet), Unicornio Azul is a Guatemalan- and French-run horse riding ranch. It’s located in what owner Pauline Decamps calls the “rural and real” Guatemala, and the scenery that surrounds it is dramatic. Open, austere, and arid, the region is characterized by its extremes: Expect everything from cold nights and dusty summers to a hot, high-altitude sun and dramatic rain clouds that appear out of nowhere.

“The landscape is rebellious but beautiful,” says Pauline, “In the Sierra de los Cuchumatanes, you see flocks of sheep, crops of potatoes and oats, juniper trees, and agave cactuses that cling to rocks. Mules carry large loads of firewood, and adobe homes are bordered by traditional stone fences. Our neighbors—ladino and indigenous—are what they are… Farmers plowing a difficult story, hit hard by globalization and the mass immigration of locals to the United States. It’s an area that’s been neglected by the government and that’s still relatively untouched by tourism—perhaps because it’s too far or not yet ‘tamed.’”

Unicornio Azul works hard to fit into the local landscape without exploiting it. “We never want to turn the people here into objects to pose for tourists’ cameras,” says Pauline. “That would be our biggest failure.” That said, the ranch does provide assistance to the communities around it. “For years, we’ve advised a rural tourism project in the community of Chacula, here in the department of Huehue. We’ve never provided any funds, instead we’ve helped them with ‘capacity building’ as they prepared to open the Posada Rural Finca Chacula. We assisted them with things like developing services, creating a marketing plan, and setting rates. The posada opened nearly four years ago and has been a success due to their own efforts.”

The ranch—which was built out of traditional materials like brick, stone, wood, and clay tiles—comprises five simply appointed accommodations. Beds are piled with wool blankets from Momostenango (a rural Guatemalan town known for its thick, heavy covers) and rooms are outfitted with various textiles and artisanal furniture. The hacienda feels Guatemalan, but not in an exaggerated way. “We don’t offer marimba concerts at breakfast, and our staff doesn’t wear ‘typical’ dress, other than what they would normally and that matches their cultural identity. We’re not too concerned about creating some kind of ‘typical’ persona; indeed, that word is already too full of clichés. We are who we are: a Guatemalan chapín and una francesa who have called this place home for 22 years.”

Pauline met Fernando while working for the UN Refugee Agency in Guatemala. Her job eventually took her away from the country, and so she and Fernando came up with a radical idea that enabled her to move back. “At the time, equestrian tourism was very developed in France but didn’t exist in Guatemala, even though it has the perfect setting for it,” says Pauline. “So we decided to do something about it. Destiny brought us to the magical Cuchumatanes mountain range without a marketing plan or a business strategy, but in the end our dream came true.”

Today, Unicornio Azul is home to 14 horses and offers guided rides through the Huehuetenango region that last from one hour to nine days. Beginners are welcome, though longer treks require more advanced riding skills. Guests set out on trails used solely by locals and head to mountain streams, hidden plateaus, wild and rocky summits, or down into the tropical lowlands. “If you really want to see the region, I’d recommend the seven-day Unicornio Azul to Finca Chacula crossing,” says Pauline. “The altitude ranges from 3,800 meters (12,467 feet) to 800 meters (2,624 feet), and you pass blue rivers, turquoise cenotes, and pine, oak, and cloud forests.” All of Unicornio Azul’s trips provide insight into the ethnic and linguistic regions through which you ride, and also provide an incredible look at the spectacular, rugged, and wild world of Guatemala. 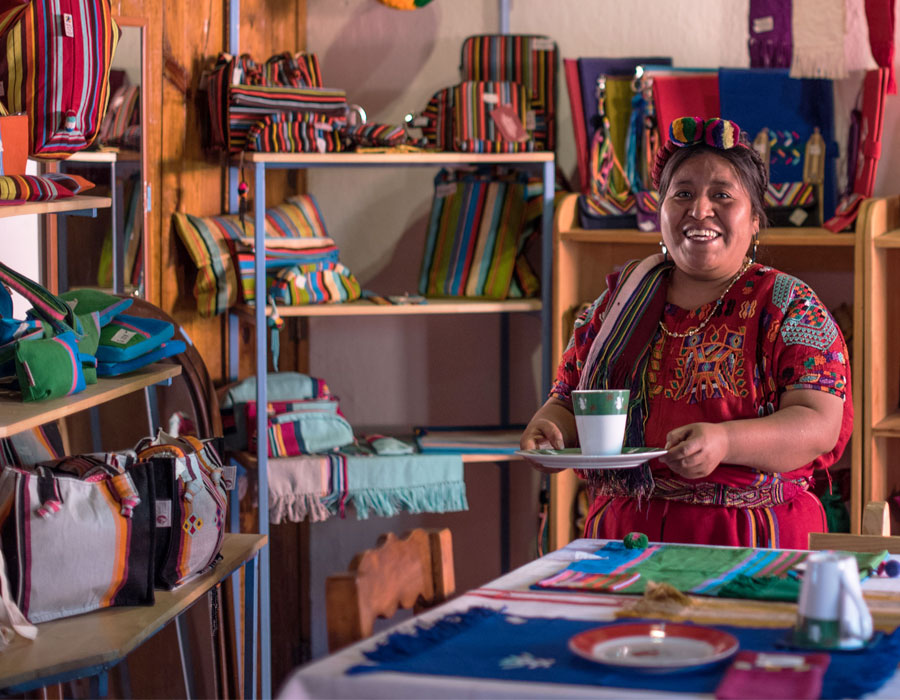 “On shopping, I like to tell clients that if they see something they really like, and they are happy with the price, they should buy it straight away,” says Viaventure guide Jane Henwood de Garcia. “Some people have read that things are cheaper in Chichicastenango, but Chichi can be rather daunting and doesn’t necessarily offer the best prices. Plus, there’s no guarantee that you’ll see the same items.”

Read any Guatemala guidebook, and Chichicastenango will always be the first market mentioned as the place to go for local goods. And there’s no denying that it’s a fascinating spot where you’re more than likely to score a fun wooden mask or brightly hued table runner. But it’s hardly Guatemala’s sole place to shop for souvenirs.

“The town of San Juan La Laguna on Lake Atitlán has a wonderful cooperative called Weaving Women,” says Jane. “I like it because it’s the only group in town that grows their own cotton and spins it by hand before dying it with natural dyes. Other groups use natural dyes, but most don’t grow or spin their own cotton. The women are all kind and friendly, you can take photos, and the textiles are an amazingly good value, especially considering all the work involved. You’ll see scarves, shawls, purses, blankets, and more.”

If you’re looking for textiles in Antigua, Jane recommends three spots for their great selection and good prices: The large artisan market behind Pollo Campero, across from the post office (“if it’s raining, definitely go here”); the artisan market that’s next to Café Condesa in front of the central plaza; and Nim Po’t. “The latter’s especially good for traditional clothing, wooden masks, and other curiosities from all over the country. Prices here are fixed—which is great for people who don’t like to bargain—and if you’re paying in cash, ask for a discount. They’ll give you 10% off.”

If you’re in Antigua but would like something other than textiles, consider cowboy boots or coffee. The town of Pastores, just outside of Antigua, offers a dozen or more shops that specialize in leather goods—particularly cowboy boots—that are phenomenally crafted and well-priced; custom work is welcome. For coffee, consider touring a local farm with As Green As It Gets or Finca Filadelfia and then purchasing some of their beans. Antigua—as well as Huehuetenango, Cobán, and Quetzaltenango—produce some of the world’s greatest coffee; stock up if you’re in any one of these spots.

Viaventure Guides: a valuable resource for our clients

Best Times to Travel to Guatemala