A Lively Way To Honor The Departed 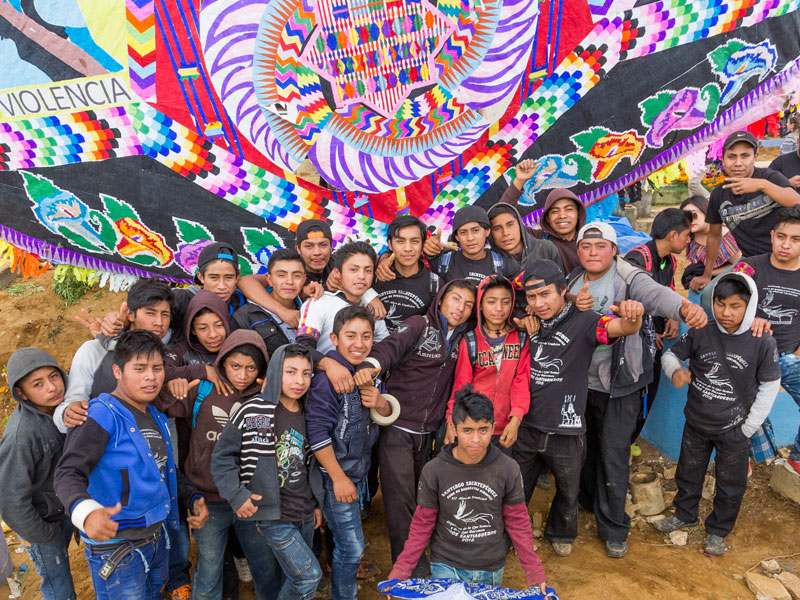 Mixing solemn traditions with modern variations, Guatemala’s annual observance of All Saints Day on Nov. 1 features colourful, hand-made kites that flutter over open fields and cemeteries in a spectacular mashup of pre- and post-Hispanic beliefs.

The ancient rite can be traced to indigenous cultures that considered it disrespectful to mourn the dead, who were kept alive in memory and spirit. Souls of the deceased can visit the living once a year for 24 hours, according to tradition, and the kites act as a beacon to help the spirits locate their loved ones.

As the custom evolved, families started attaching messages for the deceased to the tail or string of the kite. When the message works its way up and touches the kite itself, the message has reached its intended recipient. In recent decades, some kite-making teams began using the occasion to address social issues with messages regarding indigenous rights, pollution, violence, women’s justice, and more.

To celebrate the long-awaited day, the amazing Festival of the Giant Kites (La Feria de Barriletes Gigantes) dominates the Guatemalan towns of Santiago Sacatepéquez and Sumpango, where colourful kites of every size soar above local cemeteries and open fields nearby.

These delicate works of art — some of which reach up to 20 metres (65 feet) across — are constructed out of bamboo, tissue paper, glue, and string and feature elaborate designs that differ from year to year. The largest kites remain on the ground to form an impressive backdrop as the festivals unfold with music, traditional foods, and beverages.

Dozens of other kites, ranging from hand-held sizes to six metres (20 feet) in diameter, generally are traditional eight-sided Guatemalan kites, flown by groups of families and friends.

Making a unique rounded shape, the octagon is thought to represent the Maya belief in the four directions: north, south, east, and west, with four additional points to form a corona, the crown of the sun. Fringed paper is fixed to four of the eight sides; the sound of the wind rustling the paper is believed to keep away evil spirits.

Teams of kite makers (barrileteros), mostly made up of young people, begin working on the giant kites many months in advance. Their designs remain secret until the day of the festival, when the kites are fully assembled and slowly raised above the crowd.

All of the materials are natural, including the glue, which is made of yucca flour mixed with lemon peel and water. While woven stalks of “castilla” – a plant similar to wheat – form the skeletons of smaller kites, frames for the larger kites are made from bamboo, and then tied with hemp and wire to form a polygonal shape in a process called “lunada del barrilete.”

While the Kite Festivals by far are the more visible and cheerful activities, quieter and deeply respectful remembrances take place at cemeteries throughout the country.

Family members of the departed lovingly set about cleaning and tending to gravesites, which they adorn with cut flowers and beautiful wreaths to honour their loved ones. Cemeteries buzz with conversation and social activities as the scent of copal, pre-Columbian incense made from pine resin, wafts through the air. Families also bring baskets of festive food, including a special salad called fiambre, to eat and share throughout the day.

In a country rich with unique and ancient traditions, the annual Festival of the Giant Kites stands out as one of the most spectacular and easiest to reach, just a short ride from popular Antigua Guatemala.